Jackson was born on the planet Athens, which fully supported Unification. Athens was captured by the Independents and “Ownership” of the planet changed many times and during this time Jackson was a Preacher, a true man of god. Jackson thought “Unification” would be a good thing for all the people of the “Verse” until the Alliance raided his church and found medical supplies in the basement. Jackson had gotten many of the supplies from the black market to help the civilians suffering from the war. During the raid the Alliance Patrol open fire on his and his family. He was left for dead but he pulled through, his family wasn’t so lucky. He buried his family by his burned down church when the gang known as the “Dust Devils” came up and said, “We are going to set things right! Are you with us Preacher, Jackson?” He looked them straight in the eye and said, “The name’s Jax and I ain’t no Preacher no more”! That night one of the biggest and meanest members of the “Dust Devils” was giving Jax a hard time. Saying “This Preacher Ain’t no damn good to us, whats he goin’ do pray for our sins”? Jax quick drew the cold hearted son of bitch’s own gun and pistol whipped him almost to death with it. That gun was a 50 cal revolver that he carries to this day. The “Dust Devil” that he took it from was a big son of bitch named John Curtis and is still out for revenge. Jax went on a killing spree with the Dust Devils until the leader of the group, Jim Taylor asked Jax to go behind enemy lines and take the war to the Alliance leadership. This is when he meet Toby Tucker (TNT) and a beautiful Mexican girl named Ana. Toby was the teams “Demo” guy and Jax became sniper. Ana served as Jax’s spotter and they soon fell in love. The team leaned that the Dust Devils double crossed them so they left the core planets. During there escape the shuttle was hit in the engine room and the reactor started to leak radiation, Ana sealed the engine room off and fixed the reactor but died of radiation. In her last breath she told Jax to believe in god again and to help those people who couldn’t help themselves. She made him promise to move on with life and to be god’s servant again. Jax took this as a sign to be God’s avenging angel and has become relentless in his fight against the “Wrong Doers” of the “Verse”. Jax always help those in need and looks out for any Shepherds and respects all religions. 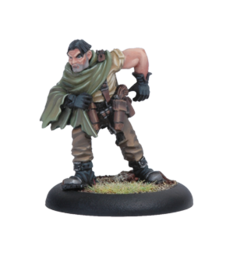